This article was originally published with our July 2020 newsletter, and has been fully updated following changes to the bank’s ownership in early 2021 (See our May 2021 newsletter for more details).

The article formed first part of a two-part review of the Customer Union for Ethical Banking’s second aim, to work for an eventual return of the Co-op Bank to full co-operative ownership. The second part of the series was published with our October 2020 newsletter, and discussed our strategy for advocating for a change of ownership.

To briefly recap the story so far, until 2013 the Co-operative Bank plc was 100% owned by The Co-operative Group. This is the cooperative that runs 80% of the Co-op shops. It is owned by its millions of customer members. However in 2013, the bank got itself into deep financial trouble and it became necessary to arrange a ‘bail-in’. This meant that the Co-operative Group's shareholding fell to 30% and a group of private equity and hedge funds took ownership of  most of the rest.

This was the event that led to the formation of the Save Our Bank campaign, and later the Customer Union for Ethical Banking. We were set up with two main aims: to safeguard the bank’s Ethical Policy and help bring about a return to co-operative ownership. We believe that we have played a significant role in achieving the first aim. The second aim is much more difficult.

In 2017 the bank went through a second restructuring, during which the private investors were asked to put in more capital. As a result of this the Co-op Group sold all its remaining shares, leaving the bank 100% owned by private equity, including hedge funds. The only subsequent change of ownership we are aware of came in April 2021, when one of these investors, BlueMountain Capital, sold its stake in the bank (12% of ‘B’ shareholdings – see below) to JC Flowers and Bain Capital.

At first, when the Group sold its shares, it was unclear exactly which funds owned exactly how many shares. However since 2019 the bank has reported the full list of its ‘B’ shareholders its Annual Report. See the bank’s latest Annual Report here. 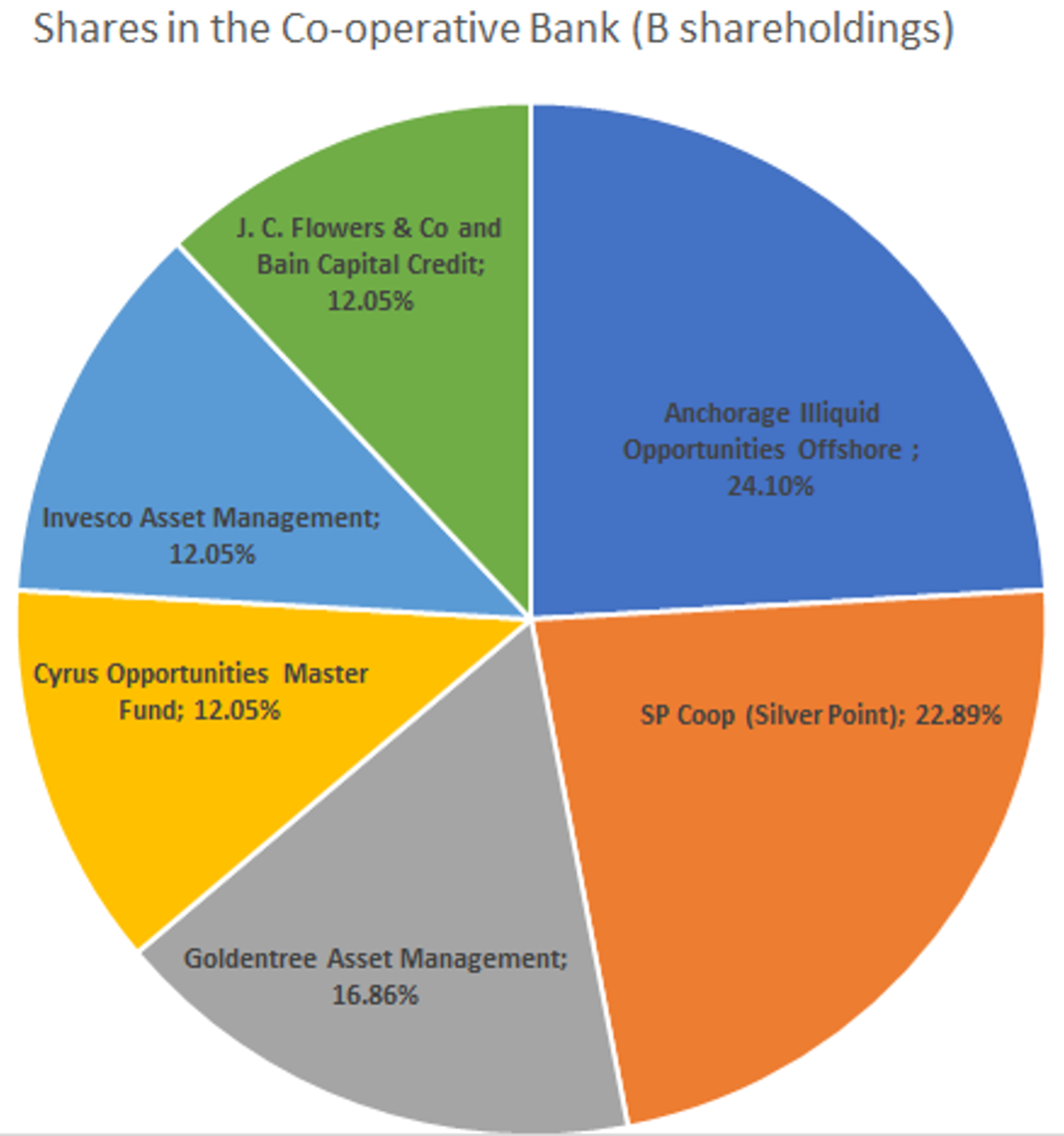 Following BlueMountain Capital’s sale of its stake in the bank to Bain Capital and JC Flowers, announced in April 2021, the bank’s ‘B’ shareholders in order of size were:

Not all of the bank’s investors are hedge funds, although the two largest, Anchorage and Silver Point, are. Others, such as Invesco, Goldentree, J.C. Flowers and Bain, are mainstream asset managers or private equity funds, which tend to work for a wider range of clients including pension funds and governments rather than just a select group of millionaires. However, we don’t have any favourites among these investors - none of them are co-operatives, and a return to co-operative ownership is what we seek.

We don’t expect the Co-op Bank’s owners to stick around for ever, although some of them have been invested for more than seven years – longer than we might have expected in 2013. Rumours of the bank’s potential sale to mainstream lenders have surfaced several times; for example in December 2019 Sky News (a regular source of Co-op Bank related leaks) reported that the bank’s owners had hired Goldman Sachs to advise on a potential sale of the bank. The story said, “Barclays, Lloyds Banking Group and Royal Bank of Scotland are said to have been among those approached about a deal.”