Welcome to this October newsletter from the Customer Union for Ethical Banking, the independent union for customers of The Co-operative Bank.

In this newsletter we’re continuing to look at the Customer Union’s second aim, to work for an eventual return of the Co-op Bank to co-operative ownership. (Our first aim is to ensure the bank keeps its Ethical Policy and sticks to it.)

In July we published the first part of this two-part series, looking at who owns the Co-op Bank now. This month we look at the more vexing question of what we, as a co-operative customer union, can do about it.

Ways to influence ownership of the Co-operative Bank

Firstly, it’s important to say we are under no illusions. For a small group – even a small but determined group – of customers to bring about the return of the Co-op Bank to co-operative ownership will be a tall order to say the least. Putting a marker down and communicating clearly that this is what we, and our 10,000 supporters, want to see, is in itself important, but how can we work actively to influence the direction of travel around ownership? Since the Save Our Bank campaign started in 2013, there are a number of strategies we have discussed, some that we have pursued and others which we continue to consider.

1.    Creating a fund to purchase shares 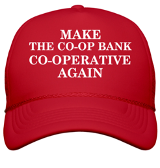 Buying and building a direct shareholding in the Co-operative Bank to grow customer influence was part of our original plan for the Save Our Bank campaign. We never considered it likely that we could meaningfully ‘buy back the bank’ in this way, but even having a small shareholding can be a useful way to influence big companies, for example by turning up at AGMs and asking difficult questions. The Customer Union was set up as a co-operative (able to hold shares in the bank) partly with that idea in mind.

The Customer Union did buy a small number of shares in the Co-op Bank in 2015, when we spotted a one-off trading opportunity for existing shareholders. We bought 500 shares at around £1.90 each. Although of course our aim was to grow influence rather than make a profit, it is fair to say this was not a financially prudent investment decision, as, following the recapitalisation in 2017, the same shares are now worth less than a penny each.

This experiment in shareholder democracy showed us that asking members and supporters to chip in to build a larger shareholding at the wrong time would be exposing them to unacceptable risks. Although we assume the risks would be lower now, smaller shareholders who own less than 10% of the bank do not have voting rights, and their influence is limited. (See our piece on who owns the bank). We think that building a shareholding large enough to win us a seat at the table is out of our reach at least for now.

2.    Engaging with the owners

The main shareholders of the Co-operative Bank, identified in our last newsletter, are likely to seek a buyer when the bank returns to profitability, or possibly beforehand. We can engage with the current owners to seek a commitment from them to think about the value they might get from co-operative or mutual buyers when they sell.

But will this be worthwhile? In practice the bank’s owners will most likely want to sell to the bidder that offers the right price. However, potential buyers will understand that the bank’s greatest asset is its incredibly loyal customer base, and that this depends to a great extent on the bank keeping its ethics, and probably also its name. A co-operative buyer with a commitment to maintain and build on the bank’s ethics would be actively welcomed by customers like us, and that would reinforce the value of its investment.

We are assessing if and when it would make sense to engage the owners about how an exit to ethical and co-operative owners may be in their best interests.

It seems to us that the best hope for the Co-op Bank at the moment would be its purchase by another co-operative or mutual, ideally an ethically-minded one with experience in finance that is large enough to take on the bank. There are institutions that check at least some of these boxes, although not many – and we do not currently have any meaningful level of influence over these institutions.

Assessing what is worthwhile

To help us navigate the murky waters of engaging with distant and often secretive hedge funds, as well as financial cooperatives which may or may not be interested in our hopes for the Co-op Bank, we are some way down the track of recruiting a “specialist panel” of experts to help us develop and articulate a clear ambition for the bank’s ownership. The panel will be designed to help us decide on a strategy for engaging with the bank’s owners and for opening a dialogue with other mutual financial institutions, and to prioritise the most worthwhile ‘targets’.

We are in the process of contacting a number of such specialists so we can proceed quickly with this. If you have suggestions and/or can make introductions, do let us know (just reply to this email).

The influence we already have

While we are under no illusions about the scale of the task to bring the Co-op Bank back into co-operative ownership, we should also remember the influence we have already built up. With no immediate options to build a meaningful co-operative shareholding in the bank, we have focused on pursuing what was already working – building a relationship with the bank that would give our members influence.

We’re now in a unique position of having built a co-operative of customers whose interests we represent in regular meetings with the bank, under an official recognition agreement.

If the bank does get sold, then it will be up to the members of the Customer Union what we do. We put it to the members when the bank re-capitalised in 2017, and most of the Union’s members cast a vote. This will be a pivotal moment to decide whether to stay with the bank, or not. Make sure you are a member of the Union so you can have your say.

The Save Our Bank Team