Welcome to this June newsletter from the Save Our Bank campaign. Since our last update, we have held a meeting with the bosses of the Co-op Bank and attended the AGM of the Co-operative Group, while the bank’s capital raising process continues.

Meeting with the bank

At the end of May, we met with the Chair and Chief Executive of the Co-op Bank. This was a helpful and constructive meeting: we heard about how the sale and capital raising process was going, and we were able to talk about the concerns of Customer Union members and Save Our Bank supporters.

One point which was very clear was that the bank’s strong ethical stance is central to all its discussions with possible buyers and investors. The bank also reaffirmed to us that, as outlined in their statement [PDF] of 7 April, it is continuing in its sale process alongside consideration of other options to build capital. The bank felt that this is not the right time to look to customers for investment. We agreed to meet again and continue discussions.

Update on the bank’s “sale or capital raising process”

The FT, Sky News and Bloomberg are reporting that The Co-op Bank is heading towards making an arrangement with its current hedge fund shareholders to raise new capital via a debt-for-equity swap. Sky News is positioning this as a deal whereby the hedge funds would take full control of the bank. There are also reports that a Qatari-Swiss financed takeover bid is in the running.

These stories come from unnamed sources, and the bank has not commented, so we are taking them all with a pinch of salt for the time being. Market analysts S&P took the trouble to speak to us and offer a more cautious interpretation.

For now our plans remain as we set out in our last update to you – we’ll aim to engage with any new owners, and continue to push for our two main demands: that the Ethical Policy stays, and that any deal includes a commitment to co-operative ownership. And of course, it's up to members of the Customer Union whether we support the eventual outcome.

The Customer Union/Save Our Bank has invited the Co-operative Group, owner of 20% of the Co-operative Bank’s shares, to help work with us and other co-operatives to create a new, customer-owned, democratic stake in the bank. 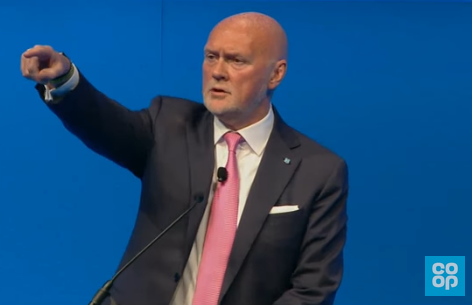 Responding to a question from Save Our Bank's Shaun Fensom at the Co-operative Group's AGM on 20 May - see video - the Group chair Allan Leighton said that it was not possible for the Group to comment while the 'sale process' is underway, but confirmed that as a shareholder in the bank, the Group is focused on ensuring any buyer adheres strongly to the cooperative values we all believe in. His comments indicated that he was sympathetic to our views, and we’ll come back to the Group to follow up this discussion.

When we asked you in January which of our plans Save Our Bank should prioritise in 2017, one of the most popular plans was to fund a research report to explore the best options for moving the bank back to the co-operative sector, and launch a campaign for the bank to follow its recommendations. We’ve started work on this research report, with a focus on how co-operatives can raise capital while protecting their democratic ownership, and look forward to sharing the results with you soon.

Now's the time to join the Union

In the meantime, if you have not yet joined the Customer Union for Ethical Banking co-operative, please consider joining us and contributing just twelve pounds a year to help fund our work.

With an announcement on the capital raising likely soon, it's vital that we customers have a strong united voice.

If you’re already a member of the Customer Union, share a message on Twitter or Facebook to spread the message. The more members we have, the stronger we can push our demands!

Rumours about the future of the Co-op Bank continue to swirl. A good time to join the movement to help keep a co-operative ownership stake in the bank, and have a say in what happens next. http://saveourbank.coop #SaveOurBank

With best wishes,
The Save Our Bank team