In this newsletter we take a look into the Co-op Bank’s latest Values and Ethics Report, published at the end of May, and we’ve got some updates on changes at the bank and renewed support for The Hive. 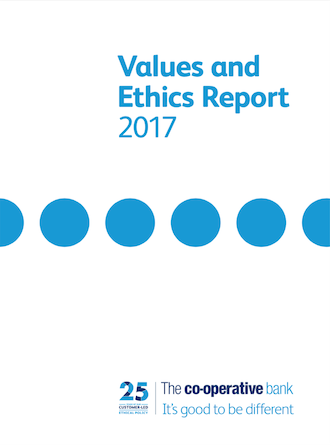 The Co-op Bank’s Values and Ethics Report is the bank’s account of how it has implemented its Ethical Policy though the year. So, for a Customer Union dedicated to holding the bank to account for its ethical promises, it makes important reading. We’ve reviewed the report at length on our website here, and presented some questions to the bank on the basis of this report.

The report includes details of the five cases in which business was turned away due to breaches of the Ethical Policy. These included “a feminist group that actively denied the rights of members of the transgender community … in breach of our position on human rights, equality, and our diversity and inclusion policies” and “an existing customer found to be involved in the online retail of luxury accessories, including the sale of mink scarves.”

When we tweeted a screenshotfrom the report earlier this month highlighting these cases, the case of the “feminist group that denied the rights of members of the transgender community” proved, perhaps unsurprisingly, controversial. Following the tweet, the story was picked up by both the Daily Mailand the Pink News- each with very different takes on the story.

From our side, we were pleased to see the bank defending the rights of transgender people, which we see in the tradition of the stance the bank took against the anti-gay evangelicals Christian Voice way back in 2005. But many people asked for more details of why this business was declined, and we would also like to see more details. We’d also like to know more about the seller of mink scarves found to be in breach the bank’s policy on the fur trade, given this was an existing customer.

Significant as the bank’s ethical policy decisions are, they are dwarfed in terms of the number of accounts affected by the 503 accounts closed for reasons of ‘risk management’. This includes 24 cases that were referred to the bank’s new Exit Forum. In our review of last year’s reportwe stated that we would like to see more detail on the decisions taken by the Exit Forum, and we’ll be pushing the bank again to act on this.

Read our full review of the bank’s report herefor more details, including the questions we’ll be putting to the bank.

The Co-op Bank’s chief executive, Liam Coleman, is stepping down after 18 months in the job, and five years at the bank in total. Mr Coleman told the Financial Times, “Having successfully completed the recapitalisation process last year, I feel it is now both the right time for me and for the business to look to new leadership for the next stage of the journey.” The bank is now looking for its fifth chief executive in seven years.

The bank renews support for the Hive

Save Our Bank was present at the Coop Congress last weekend - the annual conference for the UK cooperative sector - and we were pleased to hear the Co-op Bank announce that it is continuing its support for The Hivefor another three years.

The Hive is a business support programme to help start and grow more cooperatives and community enterprises, and as the bank’s Values and Ethics Report shows, the initiative is thriving and growing, supporting over 355 groups and co-ops with expert advice worth over £100,000 in 2017, up from 86 groups last year.

The @CoopBankUK has released details of its ethical policy decisions over 2017. Here’s the @SaveOurBank Customer Union’s review of their report, calling for renewed ethical campaigning. https://saveourbank.coop/2017_V_and_E_Report_our_view

I’m a supporter of Save Our Bank, the union of Co-op Bank customers. Check out their review of the Co-op Bank’s 2017 ethics report here:  https://saveourbank.coop/2017_V_and_E_Report_our_view