Bank in 2014 when the Save Our Bank campaighn started, we published a page highlighting some great examples from the past when the Co-op Bank has taken a strong ethical stance.

The fact that the Co-op Bank had been a leader for the industry on ethics (ever since it first adopted an ethical stance back in 1992), was one of the main reasons for launching the Save Our Bank campaign. The rationale was simple: the bank had been taken over by private investors, but it was still worth saving - and one day returning to co-operative control.

Since then, and with the creation of the Customer Union - now formally recognised by the bank - the bank has kept to a strong ethical position. There have been mistakes, and we've called the bank out on those. But the bank has held firm to important commitments like on fossil fuels.

So, here it is again - a look back at some of the bank's greatest hits. 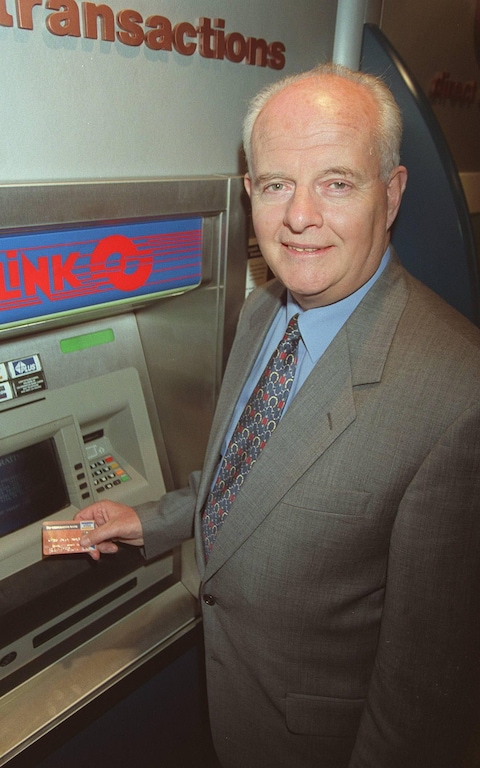 Back in 1992 - under the leadership of Terry Thomas (later Lord Thomas) - The Co-operative Bank first surveyed its customers on where they did and didn’t want their money invested. The result was an Ethical Policy promising customers that their money would not fund, among other things, human rights abuses, animal testing of cosmetics and arms sales to oppressive regimes. The bank has turned away over £1 billion in business from copmanies which breach the Policy.

Crucially, for most of the history it has been backed by independent auditing and transparent reporting on implementation. We complained when the bank failed to get an audit on its values and ethics and sustainability reports for 2019 and 2020, and now the bank is commited to having the 2020 report independently audited.

After Co-operative stores became the first to introduce Fairtrade coffee, the Bank worked with vending machine suppliers to become the first business to offer Fairtrade coffee in its vending machines. A must for any self-respecting ‘responsible’ business today, made possible by the Co-operative Bank’s innovation. Thanks to the bank’s work lobbying hundreds of other companies telling them to follow suit, top UK businesses including Alliance & Leicester, Lucas Varity, Jarvis, and the Woolwich now offer Fairtrade coffee to their staff, as the history of Fairtrade in the UK attests.

Perhaps the most hard-hitting advert the bank has ever produced, this 1996 cinema ad described the impact a Valmara 69 landmine would have on the cinema audience if tripped.

“Ball bearings would be blasted through those of you seated in rows A-G at over 1,000 miles per hour, literally tearing you apart,” intoned the voice-over. Terrifying. The advert underlined the bank’s refusal to finance the supply of arms to oppressive regimes.

In 1997 the bank released another cinema ad in which a disabled man, born with birth defects as a result of side-effects of the drug Thalidomide, regaled a group of friends with a story about the names he was called in school. He described how he flirted with a woman in a bar without noticing her boyfriend, and said it “made his day” when the boyfriend called him a “wanker”. The message: See the person, not the disability. Another great example of going whether others fear to tread.

Fifteen years before 350.org made the Go Fossil Free campaign one of the biggest divestment campaigns of all time, The Co-operative Bank updated its Ethical Policy to withdraw finance from any business whose core activity contributed to fossil fuel extraction. That meant not just ‘big oil’ and coal extraction, but also companies set up to provide essential services to these industries. This was, and remains, light years ahead of the rest of the banking sector, made possible only by the support of the bank’s customers.

The Co-operative Bank has never been one to shy away from hard-hitting campaigns that other businesses see as too edgy or political. The bank's Customers Who Care programme for 2002 concentrated on the dangers of cluster bombs, whose many sub-munitions often fail to explode on impact, killing and maiming civilians across war-torn nations. The bank sponsored new research on their impacts and raised money for mine clearance. The accompanying advertising campaign – ‘Unexploded cluster bombs: the great clear-up operation', won national awards, with Marketing Magazine saying it “rewrites the rules for companies that put ethics at the heart of their business.”

The Co-operative Bank gave Christian Voice 30 days to close its account when it found that the group made extreme homophobic statements, claiming that gay people are ‘formed’ via paedophilia, innately corrupt and unfit for the police force. Following the move, the bank was inundated with letters of support from Christians, church groups and anti-discrimination campaigners, while Christian Voice called for a boycott.

The Co-operative Bank teamed up with Friends of the Earth to promote 'The Big Ask' – a campaign to lobby MPs for a strong Climate Change Bill. Every single MP in the country was lobbied by a Co-operative Bank customer, and in November 2008 the Climate Change Act became law. It remains a landmark piece of climate change legislation, making year-on-year carbon cuts compulsory – whether the government of the day likes it or not. 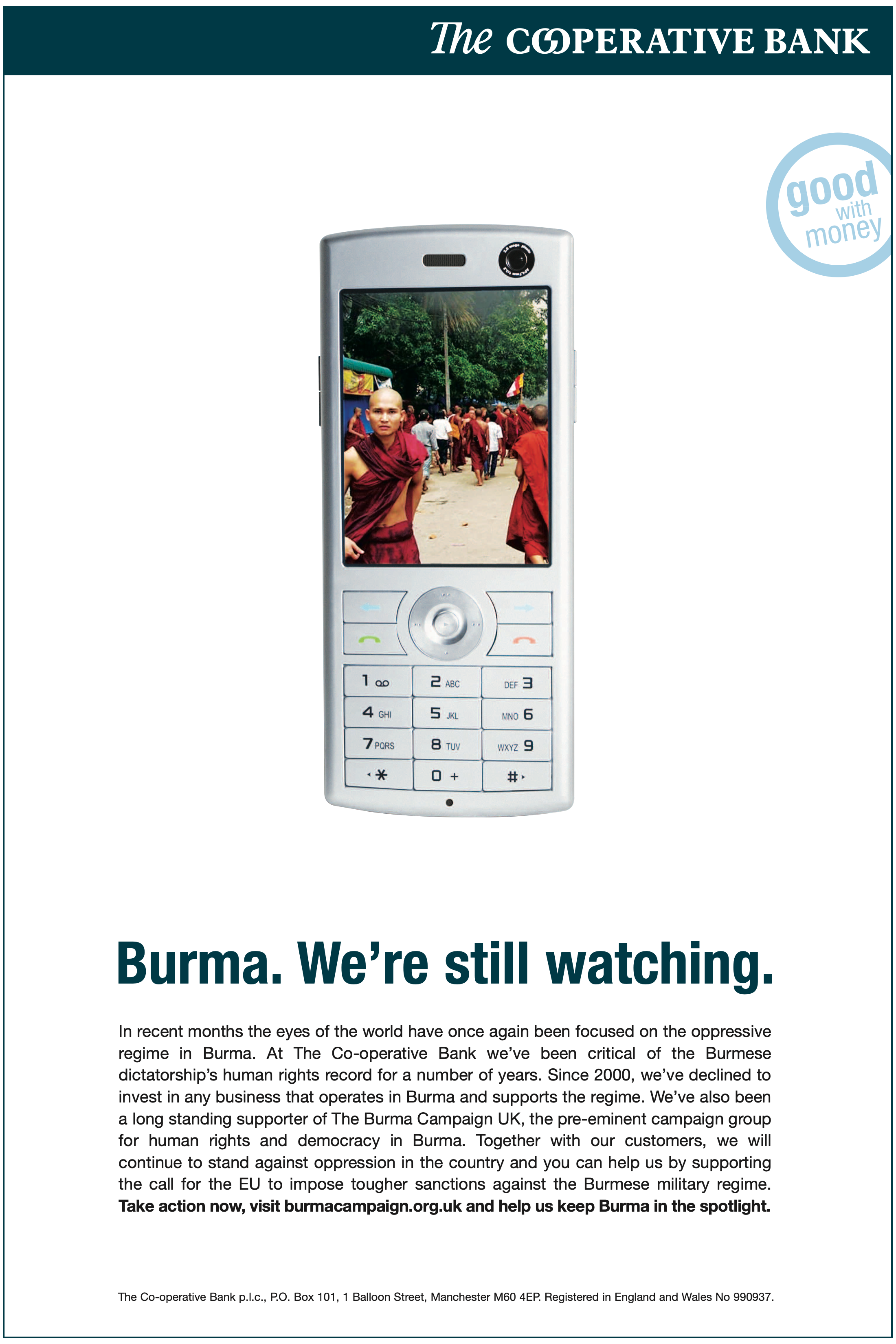 The Co-operative Bank had a long history of supporting the Burmese people in their struggle against the brutal military government that held sway until 2010, and which still exerts control to a great extent. For many years, the bank refused to finance any business that operated in Burma and supported the regime. And during the massive uprisings led by Burma’s monks in 2007, The Co-operative Bank gave its press ads over to the Burma Campaign and their call for tougher EU sanctions against the regime. You can find the add on the back page of this issue of Ethical Consumer magazine.

The Co-operative’s campaign on tar sands started with the bank before being taken up by the rest of the Group. First the Bank produced an extensive research report looking into the problems with tar sands, together with WWF-UK. The report concluded that exploiting Canada’s tar sands reserves alone would be sufficient to take us to the brink of runaway climate change. The bank then provided financial backing to the indigenous Beaver Lake Cree Nation in a legal challenge to stop drilling on their territory.

Since then the bank has promoted important causes, and continued to take a brave stance on ethics. Two examples:

In 2015 the bank made a strong reurn to campaigning with with "my money, my life" - a joint campaign wth Refuge, highlighting the prevalence of financial abuse in intimate relationships. Reasearch part funded by the bank shone a much-needed light on a type of abuse that had escaped mainstream attention.

In a possible echo of the famous decision on Christian Voice, the bank declined business in 2020 from an "organisation considered to be advocating incitement to hatred on the basis of religion"