Co-op bank returns to campaigning with "my money, my life"

10 December - a new research report has been published on financial abuse in intimate relationships, as part of a joint campaign between the Co-operative Bank and Refuge. In the largest study on this area to date, the research found that nearly one in five British adults - 9.2m people - say they have experienced financial abuse in an intimate relationship. The research was reported on in The Guardian.

The “My Money, My Life” campaign aims to raise awareness of financial abuse in intimate relationships, where financial control, exploitation or sabotage are used as a means of control. 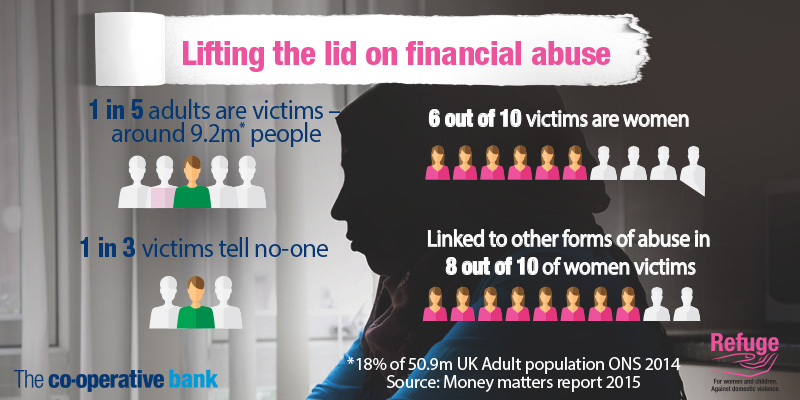 The chair of the bank's Values and Ethics Committee, Laura Carstensen said: “While other types of domestic abuse are well-documented, the impact of this kind of coercive control where money is used as a weapon within an intimate relationship is not yet fully understood."

The chief executive of Refuge, Sandra Horley CBE pointed out that: “Financial abuse is a form of domestic violence and the consequences of this type of abuse can be both devastating and long-lasting."

Save Our Bank welcomes this return to forthright campaigning by the bank.

The research found that 18% of all adults in the UK have been a victim of financial abuse in a current or past relationship. Victims span gender, age and income groups; however 60% of all cases are reported by women. Other key findings include:

​The top signs of financial abuse among victims were identified as indicated in the table below.

The report makes a series of recommendations on how bankscould positively support victims. The Co-operative Bank says it is committed to implementing key recommendations and working with the industry to: