Update 21 May 2022: after this newsletter was sent out, the bank has since responded to our questions. You can read the responses here.

Welcome to this newsletter from the Customer Union for Ethical Banking, the independent union for customers of The Co-operative Bank. This month’s newsletter takes a detailed look at the bank’s new Sustainability Report. As such, it’s a little longer than usual.

Before we get to that, we wanted to share what the bank has told us about its response to Russia’s invasion of its sovereign, democratic neighbour, Ukraine. We welcome the bank’s strong stand in condemning this invasion, as it has many other acts of aggression.

The Co-op Bank’s response to the invasion

The Co-op Bank has contacted us with an update on its response to Russia’s invasion, which we wanted to summarise here (shortened a little for space):

“We have been working at pace to ensure we are doing our utmost to support those impacted at this time in several ways: 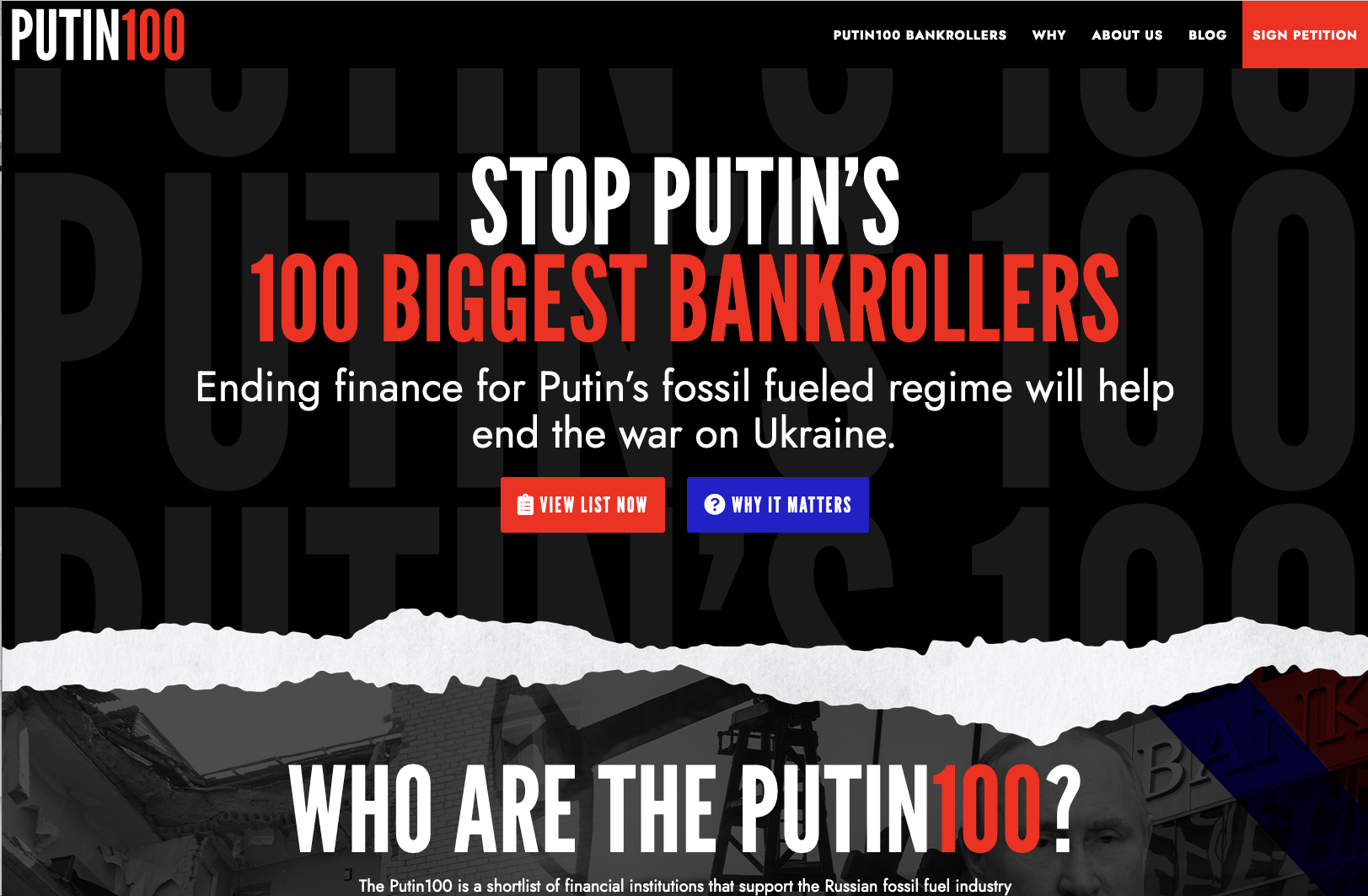 Meanwhile if you want to learn more about the links between the finance sector and the Russian regime, including its fossil fuel industry, check out the Putin 100 page here, and BankTrack’s page on banks and Putin’s war here.

At the end of February, the Co-op Bank released its annual Sustainability Report, setting out what it has done in 2021 on ethics and environmental issues. You can read the report here [PDF]. As a Customer Union dedicated to ensuring the bank keeps its ethical standards high – as well as working for a return to co-operative ownership – it’s important for us to take a close look at the report, tell you about important developments, and ask questions of the bank where needed. So let’s do that.

First up, this year’s report has been audited by an independent sustainability assurance company, SGS – marking a return to external assurance after a three-year hiatus. We’re delighted to see this, as we have been calling for a return to such assurance since this was surprisingly dropped for the bank’s 2018 report. We hope to see a commitment to externally-audited reporting in the bank’s new Ethical Policy later this year.

More on what the auditors actually had to say later, after we take a look at what’s in the report itself.

The bank’s main targets: a net zero target is coming.

Up front, the bank sets out its most important targets for environment, social and governance issues, including how the bank did in 2021 and what it plans to do in 2022. Significantly, the bank plans to set a net zero target for the emissions caused by its finance, by the end of this year. We called after last year’s report for the bank to start measuring and managing its financed emissions, and so we’re pleased to see this.

Most large UK banks have already set net zero targets, although these are typically long-term 2050 targets that allow room for continued and reckless financing for fossil fuel expansion (which the Co-op has long ruled out). We’re looking forward to a realistic but leading-edge target which is up to the challenge of the climate crisis. We are also a little disappointed to read in the report about “work being undertaken within the financial services sector to establish a reporting framework” for financed emissions, which is framed as a reason for the bank not yet having its own targets in place. There are several well-developed standards in place for financed emissions which are being used by banks large and small, and we also pointed this out last year.

Other main targets include keeping the bank’s direct carbon emissions low, avoiding waste to landfill, supporting the co-operative sector, volunteering, and improving gender diversity. That’s as well as a target to launch an updated Ethical Policy this year, and an interesting plan to launch ESG labelled bonds, Green Mortgages and Homeless Bank Accounts.

The bank’s environmental data generally shows the bank’s impact on the environment trending in the right direction, with greenhouse gas emissions for example down 18% in 2021 even after last year’s 47% decrease. Covid has had a big impact here, and the bank recognizes its challenge is to continue this trend.

One indicator that is not heading in the right direction is lending to the renewable energy sector. This has declined from £24 million in 2019 to just £9.5 million in 2021 – and the bank’s 2022 target is only to maintain “ongoing investment”. There’s no explanation given for this decrease. It’s vital that the bank keeps reporting on indicators even when what they show is uncomfortable, but we would like to see the bank set a more ambitious target to get its lending for renewables growing again, and especially to support community-owned projects. 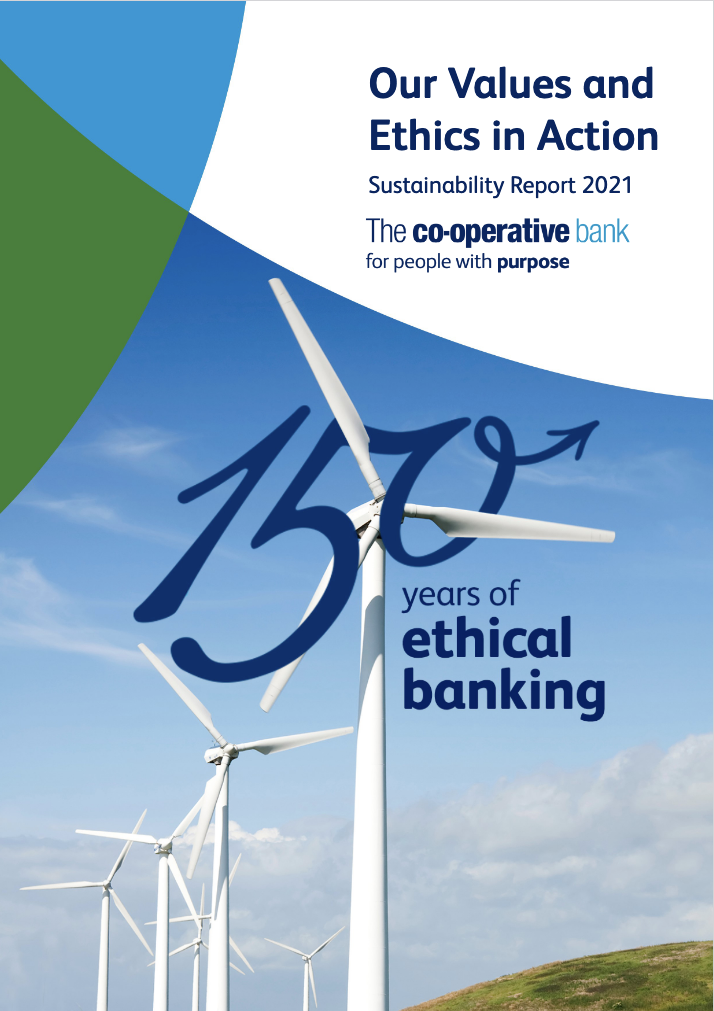 As we know, under the Co-op Bank’s unique Ethical Policy, every business application from the bank is screened, with those that raise potential issues referred for enhanced screening. In 2021 there were 328 businesses referred and 10 declined. Both of these figures are down on last year, but an increase on the years before that.

The ten businesses turned away by the bank include six businesses that were involved in the oil and gas sector, breaching the bank’s climate commitments; one business involved in the manufacture of indiscriminate weapons; one linked to a case of modern slavery; one which failed to meet the bank’s standards on animal welfare and one existing customer that was “asked to find a new banking provider due to a reputational conflict” with the Ethical Policy.

Declining potential customers (and sometimes exiting customers) due to ethical concerns and reporting on it in this way continues to set the bank apart from its competitors. However it does seem that reporting on declines is less detailed than in previous years, and while we understand the bank cannot usually name names, we would like to see a little more on why these businesses were turned away.

The reputational risk posed by the existing customer related to reported irregularities within the governance and finances of the organisation.

… and lots more good stuff – too much to cover here.

Elsewhere the report details the bank’s support for The Hive, the support programme for co-operative businesses (£1.7 million since 2016, and another £400,000 coming in 2022); its work with Centrepoint to tackle youth homelessness (£2 million raised since 2017); customer donations for five charity partners as part of the bank’s Everyday Rewards scheme (£1.3 million since 2016); and its support for environmental projects around the world through its carbon offsetting projects.

And on the campaigning front there are updates on the bank’s campaigning on human rights with Amnesty – where customers and staff are supporting human rights defenders through Write for Rights, and the bank is supporting training the next generation of defenders through the Rise Up programme. And on its new partnership with the Zero Hour campaign for a Climate and Ecological Emergency Bill. We’ve been urging the bank to return to meaningful campaigning on issues like climate change, and the bank is well and truly back in this space. Great.

The report ends with a statement from the bank’s new sustainability assurance provider, SGS. The auditors give the bank a clean bill of health in terms of the accuracy of the bank’s 2021 data, consistent with the ‘limited’ level of assurance that they have been commissioned to provide. They also identify several areas of good practice, and several more areas for improvement. Among these is a recommendation to expand the scope of the bank’s “zero waste to landfill” target to include sites where the landlords rather than the bank control waste management, which strikes us as a particularly worthwhile point for improvement.

In terms of the auditor’s work on the bank’s ethical screening, it is clear SGS reviewed the numbers of businesses reviewed and declined, but it appears they did not review the decision-making itself, for example to make sure that decisions made are well-evidenced and that the Policy is applied consistently. Previous auditor’s statements make clear this was reviewed in the past, and we would ask the bank and SGS to make sure that ethical decision-making is subject to proper external scrutiny. We would also like to see the bank return to a higher (“reasonable” or “high”) level of assurance for its ethical screening activities in particular, given the importance and uniqueness of the bank’s screening approach.

That’s all, till next time

There’s a lot more in the Sustainability Report – although at 28 pages (including a four-page statement from the auditor) it remains pretty accessible. If you’d like to know more, give it a read and let us know any thoughts you have.

Thanks for your support!