At the end of a tumultuous week at The Co-op, Save Our Bank has teamed up with Unite, Britain’s largest trade union, to call on the Bank not to make the same mistakes as the Group (supermarkets etc) on bonuses.

On Tuesday The Co-operative Group’s CEO, Euan Sutherland, resigned after less than a year in the job, after proposals regarding his pay package (including a £1.5 million retention bonus) were leaked to the press. We were outraged by these proposals, and many of our supporters have got in touch with us to express their anger on this issue. 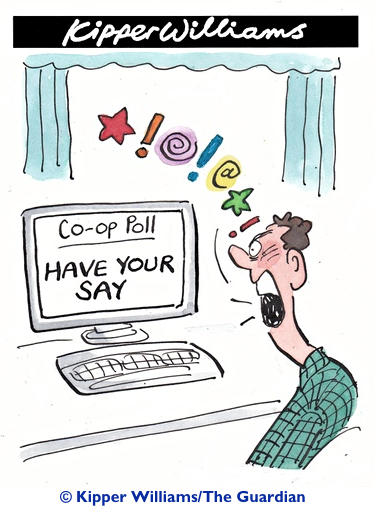 However, it is important to bear in mind that the current crisis is not about the bank.

The Co-operative Group, which includes Co-operative food stores, pharmacies and funeral services, now only owns 30% of The Co-operative Bank, and although it is still the largest shareholder, the two businesses are managed increasingly separately.

For now, the pay row is solely about the Group, and the Co-op Bank chief executive Niall Booker remains in place. However the two businesses are closely linked in peoples’ minds, and are often confused in the media, and as such the scandal has hurt the bank’s reputation by association.

The best thing the bank can do now is to clearly distance itself from the bonuses scandal.

This is why we are teaming up with Unite, Britain’s largest trade union and the main trade union representing Co-operative Bank staff, to call on the bank to firmly distance itself from the scandal at the Group by including questions on executive pay and bonuses in the upcoming Ethical Policy consultation.

We want to see the bank take a leadership position on fair executive pay, by avoiding excessive pay-outs and bonuses and making clear that it remains an ethical alternative. Read more in today’s press release.

Our message remains, don’t switch yet

It is really important to keep the pressure on the bank, particularly in the run-up to the forthcoming consultation on its Ethical Policy. That means sticking with the bank: if we leave in ones and twos we will have no impact.

With all of the missteps at the Group and the Bank in recent months, we want to drive home the message that the Bank needs to repair its reputation by clearly committing to keep its Ethical Policy in place in its current form, with no watering down of ethics.

We have been lobbying the bank on this, and you have been writing and tweeting to the bank in your hundreds. We think the message is getting across. Stay with us.

Help us keep up the pressure

Help us get the message across to the bank. If you're a social media user then please contact the bank:

Dear @CoopBankPR - Don’t make the same mistakes as the Group: include pay & bonuses in the ethics consultation #SaveOurBank

Join the Save Our Bank campaign and tell the Co-op Bank to make sure it doesn’t make the same mistakes as the Group on pay. http://saveourbank.coop/join

You can contact The Co-operative Bank about their ethics and the executive pay scandal using the web form here. There's some suggested text you can use here. Don’t forget to mention Save Our Bank and email us (info@saveourbank.coop) if you get an interesting response.

The Save Our Bank campaign team