Report from the 2019 Gathering

Report of the annual Customer Union & Save Our Bank Campaign Gathering

The annual Gathering of the Save Our Bank campaign and the Customer Union for Ethical Banking (CUEB) took place on 16th November at Ziferblat in Manchester and online.

The Agenda was split into three parts: (1) engaging with the bank; (2) small business customers and ethics; and (3) next steps for the customer union on ownership.

Part 1: Engaging with the bank 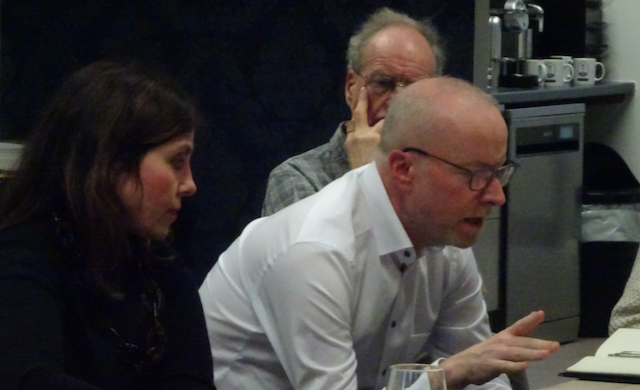 Update from the bank: Lesley McPherson and Chris Larmer updated the Gathering on developments in since Andrew Bester joined the Bank in August 2018 as CEO:

Customer Union members then had the chance to raise questions for the bank. Issues raised included:

Update from the Customer Union: CUEB director Shaun Fensom began by setting out the recognition agreement which CUEB and the Co-operative Bank (hereafter ‘the bank’) have agreed. This is the first time a UK business has recognised a union of its customers, and sets out that the parties to the agreement share common objectives and will meet regularly to discuss the bank’s Values and Ethics and any concerns the Union and its members may raise. The bank and CUEB later signed the recognition agreement together at the gathering. For more information on the recognition agreement, see here.

The Customer Union successfully raised an issue with the bank regarding a customer’s attempt to transfer funds to Sudan for charitable purposes, in response to which the bank unblocked the requested transfer.

The Customer Union also asked the bank if it would support its customers in joining the Global Climate Strike called in September 2019, and was pleased to see the bank lend prominent support to the movement, including joining marches in Manchester with its own branded banners.

External assurance and auditing of the bank’s ethical reporting: CUEB director Ryan Brightwell discussed the Customer Union’s successful advocacy with the bank for it to re-establish external assurance of its Values and Ethics report.

In 1998 the Coop Bank became the first bank to have its sustainability reporting externally audited. This external audit has occurred each year since, and is seen as crucial for ensuring external scrutiny of the bank’s Ethical Policy implementation. However the bank’s most Values & Ethics report was not externally audited. CUEB raised this issue with the bank and the bank has committed to reinstate auditing of its Values and Ethics reporting in the coming year. CUEB has presented a briefing paper setting out its recommendations

Part 2: The bank, its small business customers and ethics

Donald Kerr, director of SME Banking, described his work to improve the bank’s services to small and medium-sized enterprises (SMEs). The bank is offering free banking to SMEs for 30 months and is working with the Federation of Small Businesses and the Greater Manchester Chamber of Commerce to improve the banking process for SMEs. The bank’s definition of SMEs includes charities, not-for-profit companies and community initiative companies.

The bank has a £50m grant from the Williams & Glyn fund for creating a banking mobile app and other SME business improvements. 2020 is expected to show the bank’s first growth in SME customers for some years. The bank will upgrade its online banking services for SMEs over the next 2 years.

Part 3: Next steps for the Customer Union

The Coop Bank representatives left the meeting for this part of the proceedings.

Ownership: CUEB director Rob Harrison reviewed the Customer Union’s goals on ownership and engagement and the current status of the bank’s ownership The majority of shares in the bank (70%) are owned by a group of private equity and hedge funds. These hedge funds are likely to seek an exit in the medium-term future, most likely after the bank returns to profitability.

This gives CUEB time to make sure this sale process includes factors beyond financial return, and that proper consideration is given to ethical issues and mutual ownership. To help develop a strategy on ownership, the CUEB board will approach appropriate people to join a new specialist panel to provide expert advice and guidance on CUEB’s options for supporting an eventual return to cooperative ownership.

Discussion: CUEB retains a small shareholding in the bank, although it has been devalued. Options to build this stake have been explored but since the shares are not publicly traded, there have been no opportunities to do so. Crowdfunding to grow this shareholding could be part of our strategy. However in hindsight it would have been irresponsible to have encouraged members to invest in the bank given the collapse in the value of shares since CUEB purchased its stake. Working to develop links with existing co-operatives which may have an interest in the bank was also discussed.

The meeting finished with all attendees sharing their final reflections and with the Union reaffirming its commitment to building a constructive relationship with the bank while continuing to hold the bank to account over its ethical commitments.